Crooked and hypocritical politicians are celebrating.

Apparently, I’m shaken enough about Jon Stewart’s announcement (leaving @thedailyshow) that I’m feeling the urge to blog about it. Although his contract is up later this year, I thought his return was a sure thing, even if Comedy Central had to back up another truck each payday. Letterman and Colbert didn’t bother me as much as I’d thought, possibly because I knew we still had the most important host with us. But now?

Larry Wilmore is doing a fine job and I enjoy his show, but he’s still growing into it. John Oliver is doing a terrific job, but he’s locked into an HBO contract and we only see him once a week (would he have quit Daily Show last year if he’d even had an inkling that Jon Stewart was leaving this year? I have to doubt it. It also seems to indicate that Stewart only make the decision recently).

Regular readers of this blog know that I was at the Daily Show with John Cleese in November, and based on the very little I could see, everything looked happy and orderly, and it all seemed to run like a well-oiled machine. Perhaps that gives us hope that whoever steps into those massive shoes just may be able to carry it forward even a fraction as well as Jon Stewart has done.

My Python Process class today at the iO Chicago discussed stealing sketches. John Cleese highly recommends it as a method of learning to write them (see his autobiography So, Anyway…), and he takes his own advice. In fact, he stole a sketch previously written by Graham Chapman and himself for the eighth episode of Monty Python’s Flying Circus. Here’s the original sketch. Any guesses what it turned into?

My Python Process class at the iO did another typically fine job with their sketch-writing, so I rewarded them by showing the very first episode of Monty Python’s Flying Circus. I did do a bit of annotation, telling them the story of Peter Sellers’ milkman after “The Mouse Problem” sketch. Their homework this week was inspired by a suggestion from John Cleese’s So, Anyway… And next week I’ve got something very special planned involving an early sketch virtually unknown in the U.S. (Or Britain, for that matter.) 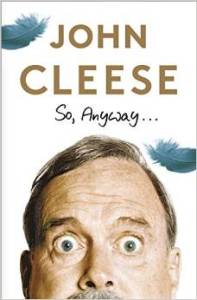 One of the many, many highlights of traveling with @johncleese during the North American @soanyway book tour was interviewing him on stage at the Tivoli Theatre in Downers Grove, Illinois. And, one of the highlights of getting to interview him was reading a 1948 Show sketch. It’s so funny that even I couldn’t screw it up. Take a look here…

Eugene Robinson of the Washington Post walking past us in the hallway.

Howard: Eugene Robinson! Your paper did the best review yet of John’s new book So, Anyway…

John: (pulling out wallet and shoving a few bills at him) Could you pass these along to the book critic and let him know I really appreciated it?

Robinson: I’m a journalist. Do you really think I’d pass along the money? 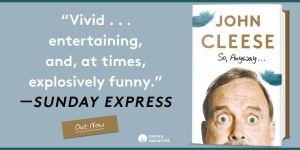 This is the week! So, Anyway… is being released in North America on Tuesday, so keep your eyes peeled for lots of John Cleese in print, radio, television and the web–particularly the latter, where I’ll be posting and tweeting along the journey with John as he talks, and talks, and talks about his new autobiography. This will be the place to be, starting with Tuesday’s Barnes and Noble signing at 555 Fifth Avenue from 12:30 to 2 pm. And Tuesday evening, there’s a New York Times “Times Talks” event at The New School, 66 West 12th Street at 7:30 pm.

Then, Wednesday morning, be sure to watch Morning Joe on MSNBC. Lots of #johncleese and #soanyway this week–and if you don’t live in New York, don’t worry–he’s going to be doing a lot of traveling. And, I’ll be with him all the way, giving you all the latest updates! 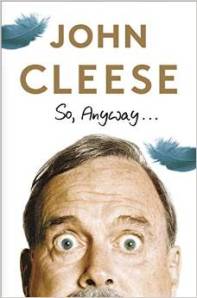