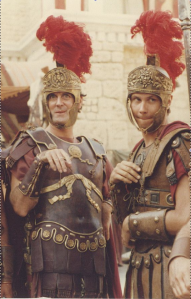 John Cleese was my boss in “Life of Brian,” and later on, in Santa Barbara as well.

I grew up in small-town Illinois and started out in journalism. The very first piece I ever got paid for writing was an interview with “Curly Joe” DeRita, the last surviving member of The Three Stooges. I was working in radio news when I went off to Tunisia to live and work with the Monty Python guys on the set of Life of Brian. I eventually began writing on the Pythons for an assortment of magazines, and became a regular writer for Starlog magazine. And then I started writing Python books. I ended up moving to Chicago and lived there for a dozen years. I studied with improvisation legend Del Close during the time when the Improv Olympic (now the iO) was getting under way. In fact, I went on to co-write the improvisational manual Truth in Comedy, and even became Del’s biographer years later with The Funniest One in the Room: The Lives and Legends of Del Close. Del was the guru of longform improvisation, and taught just about everyone worthwhile, from John Belushi and Bill Murray to Tina Fey, Amy Poehler and Stephen Colbert. But the point of all this is that I learned to write improvisationally. It turns out that the rules of improvisation are much like the rules of good writing. For example, that’s how I learned to start scenes in the middle and eschew exposition.

I’ve written a little bit of everything, since then, I suppose. I’ve written non-fiction (The First 280 Years of Monty Python, And Now For Something Completely Trivial, Life (Before and) After Monty Python), I’ve written biography (The Funniest One in the Room), I’ve written memoirs (Monty Python’s Tunisian Holiday, about my life on the set of Monty Python’s Life of Brian in Tunisia), co-written an improvisational manual (Truth in Comedy) and a graphic novel (Superman: True Brit) as well as other comic books.

I’ve also co-written a YA novel (The Dare Club: Nita) with my wife, Laurie Bradach, which was great fun. And I’ve written dozens, possibly hundreds of magazine articles.

4 thoughts on “About Kim “Howard” Johnson”