Terry Jones was a true Renaissance man. I’ll let the journalists describe all of his talents and the various roles he played in his life, but they included director, children’s book author, historian, and Mr. Creosote. And he was brilliant at all of them.

What many people don’t know is what a kind man he was. He couldn’t pass a homeless person on the street without putting money in their hands.

He was the consummate host. Terry never let anyone’s glass run dry. He 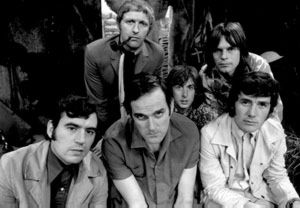 truly appreciated the best food and drink, and was no slouch as a chef.

He was brilliant. I spent weeks in Tunisia watching him direct Life of Brian, and I think the results speak for themselves.

He was funny. Obviously. I was privileged to work on a screenplay with him, and observe how quick he was at both jokes and story construction. And of course, there was Monty Python. Say no more.

And he was the truest, dearest, most loyal friend a guy could ask for. To be able to spend time in his company was one of the greatest privileges I have ever enjoyed, and to know I won’t be enjoying his company on this mortal coil is heartbreaking.

But I have memories. Oh, so many memories. Introducing him to Del Close one afternoon, a raucous dinner with Terry and Douglas Adams one evening in Chicago, enjoying dinners with his family, producing shows and workshops for him in New York, Atlanta, and especially in Chicago.

I spent a week with him in London a week before he went public with his diagnosis of dementia, knowing it would be the last quality time I would ever spend with him, and I’m so glad I did. 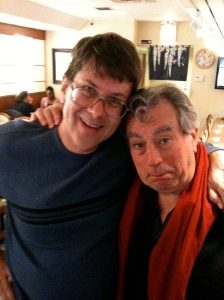 We all knew this day was coming, but I am surprised at how ill-prepared I am to say goodbye. Terry was larger than life, with shoes impossible to fill. I mourn with his family and friends in London and around the world.

I leave it to John Cleese to offer his take on it, one that Terry would have loved: Two down, four to go.