I’ll start posting about my London visit with the Pythons soon. In the meantime, click here for a little snack to tide you over…

Finally had a chance to post after the Last Night of Python, but I’m swamped. In addition to much Python to write about, I need to write a tribute to Garry Goodrow, a founding member of the Committee. But I’ve just come back from a later dinner with Terry Jones, and my fingers aren’t operating as well as they might, so I’m going to have to delay comments until later into the weekend. In the meantime, I’m alive and well and having a terrific Pythonic time. More to follow.

Like Loading...
As some of you may know, my friend-since-childhood Walt Willey (better known to some of you as Jackson Montgomery from ABC’s late, lamented All My Children) and I teamed up about six years ago. Our mission: to return community theatre to our home town of Ottawa, Illinois. 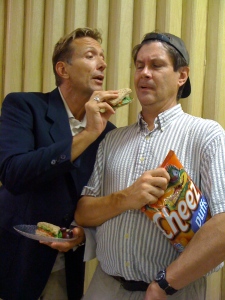 We started with a production of The Odd Couple that was, to put it mildly, a rousing success, thanks to more people than I can mention. We followed that with a long line of theatrical classics, including Arsenic and Old Lace, Plaza Suite, Harvey, and Deathtrap, a big show every summer while we helped mentor local students interested in improvisation and theatrical acting. We sweetened the pot each summer by bringing in so many of Walt’s All My Children co-stars, including Jill Larsen, Julia Barr, Taylor Miller, Kale Brown, Bobbi Eakes, and Vincent Irrizary.
One of the drawbacks of going to London is that it means I won’t be able to do the summer show this year. Auntie Mame is going to be our biggest production yet, and if you are going to be anywhere within driving distance (or heck, within flying distance) of Ottawa, Illinois, I would strongly advise you to check it out July 25, 26, and 27. Tickets and more information are available through http://www.experienceottawa.com or simply by calling 815-434-2737.
Oh, and by the way, be sure to get there on time, as there is a virtual appearance by yours truly. Okay, so I am participating, even though I’ll be in London. But you’ll have to be there to see what I’m talking about.
And break a leg, Auntie Mame! 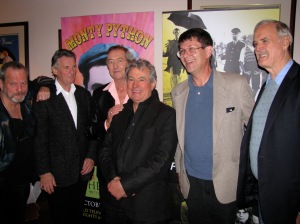 When John Cleese told me about it last September, it seemed like a long way off. But this is it. Some of my friends think that if this is successful, it’s going to lead to a tour. Based on what I know (but can’t really talk about), I don’t think so. For one thing, this show is just too big to tour–and the individual Pythons are just too busy to do this again. So if you want to see it live, at least on the big screen, it’s now or never.

I’ll probably try to write a longer appreciation afterward, either after the show or after I get back to the States. And yes, I do know what a lucky bastard I am to have gotten to hang out with them all over the decades.

Time out from Python for more comedy.

This is the last week of the iO Theatre at its North Clark Street location, before it opens in August at its new-and-improved four-stages-no-waiting location by North Avenue and Clybourn.

It’s hard for me to be too pained by its passing (particularly because the new one is going to be so cool).

I already lost my first iO, though we called it the Improv Olympic back then, and I hardly even noticed at the time.

Crosscurrents Cabaret was just north of Belmont on Wilton, and that’s where it all started. When the Baron’s Barracudas wound up their run, I didn’t see as much of it for a while. But the iO has always wandered a bit, even when I was taking classes at Crosscurrents. It’s now been on North Clark for decades, where it has housed classrooms, stages featuring some of the best improvisation anywhere, and well as the earthly remains of Del Close. In recent years I’ve reconnected and begun teaching again, and I can see why so many are so sad to be losing it.

A few years back, I remember Dave Pasquesi pointing out a huge construction site on Wilton near Belmont. It was all gone, every scrap, and I was surprised at how little affected I was.

So I can only tell you this–I’ve lost the iO before, and it’s not about the location, it’s about the work. The iO always comes back bigger and better than before, and I have every confidence that this will be the case this time. Good work, Charna. See you at the new digs, Del.

Like Loading...
At last! Whether you’re going to the O2 this week, watching The Last Night of Python at one of the hundreds of theatres around the world, or simply aren’t near enough to do either, the perfect Python accessory is here at last. 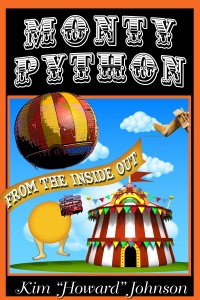 Like Loading...
My posting over the next week-and-a-half is going to be more erratic than usual. As I may have mentioned, I’m going off to London to see the Pythons.
I’ll be posting whenever possible, although I don’t know how much that will be–maybe a lot, maybe not all all. If it’s the latter, boy, am I gonna have a lot to write about when I get back here… #montypythonlive

Like Loading...
Whether you’re going to be seeing the Python Reunion show this week or not, I’ve got an announcement that may enhance your appreciation of the current occupants of the O2 Arena. However, I can’t reveal it quite yet. Not that I don’t want to–but I can’t. As soon as I can announce it, I’ll explain why I couldn’t announce it sooner. But I’ve been working on it for a little while now, and it’s something that, for several reasons, I wanted to finish while the Pythons were still doing the show.
I hate to be a tease–believe me, I’m really excited, and I’d love to tell you now–but I have to wait. But soon. Very soon. #montypythonlive

It looks like all of London is getting into the Python spirit. What else could explain this 50-foot dead parrot that’s turned up near the Tower Bridge? #montypythonlive 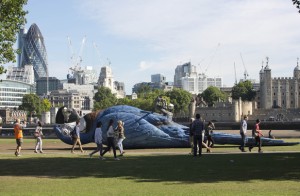 How are they ever going to fit him into one of those red swimsuits?#montypythonlive