This seems like a good time to write a little more about George.

I’ve talked about my various encounters with George in the past on this site. 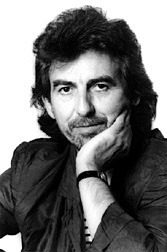 We shared one brief moment years ago that he I’m sure meant nothing to him, but has stuck with me ever since.

The first time I met him was in the Sidi Mansour while we were filming Monty Python’s Life of Brian; George had just arrived as we were all watching rushes. At some point, as the group exited and was milling around in the lobby, I introduced myself and gave him a copy of one of my Python fanzines. He began looking through it as Eric Idle approached and asked what he was doing. He showed Eric the zine. “This gentleman just gave me one of his Python magazines,” he told him.

This gentleman. George Harrison called me a gentleman! This was particularly amazing to me because at that moment, I looked like anything but a gentleman. I had gone to the hotel directly from the hot, dusty, dry set, I was wearing a tank top and shorts. My hair looked like it was cut in a way that it would all fit under a Roman soldier helmet without any of it sticking out, that being the purpose. I may have looked like many things, but a gentleman would not have been high on the list.

But none of that mattered to George. He was all about respect, even to one odd, enthusiastic young stranger. This gentleman…

I was lucky enough to hang with him after that, but to this day, I never forgot that first moment. And in part because of his example, I learned to treat others with respect, despite how they may have appeared, and to me, they are a gentleman (or a lady) unless or until they prove otherwise. It has served me well over the years. And it’s just one more gift from George.

[BTW, I only recently learned there is apparently a little controversy over his actual birthdate. It was long thought he was born at 12:10 am on February 25, but he gave other interviews where he said it was 11:40 pm on February 24. If you’re more interested in this than I am, google it and you’ll see what I mean.)

Today was the final regular session of my Python Process class at the iO Chicago. We’re having too much fun to quit, though, so we’ve got one more rehearsal, and then we’re doing a staged reading of some of our best stuff at the Chris Farley Cabaret at the iO on Friday, October 6th at 7 pm. Don’t worry, I’ll remind you again.

I’m going to be genuinely sad to see this class end, it’s a great group of people and very talented, funny writers (the two are not necessarily mutually exclusive). 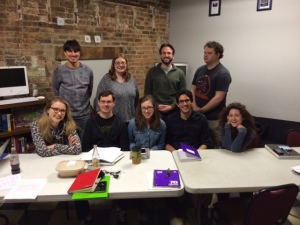 We’re missing a few, like Stevie and Ashley and Ross, but this will show you what a presentable group they are. If you want to find out how funny they are–well, you’ll have to come to the iO October 6th.

Best four words of the winter: pitchers and catchers report.

Crooked and hypocritical politicians are celebrating.

Apparently, I’m shaken enough about Jon Stewart’s announcement (leaving @thedailyshow) that I’m feeling the urge to blog about it. Although his contract is up later this year, I thought his return was a sure thing, even if Comedy Central had to back up another truck each payday. Letterman and Colbert didn’t bother me as much as I’d thought, possibly because I knew we still had the most important host with us. But now?

Larry Wilmore is doing a fine job and I enjoy his show, but he’s still growing into it. John Oliver is doing a terrific job, but he’s locked into an HBO contract and we only see him once a week (would he have quit Daily Show last year if he’d even had an inkling that Jon Stewart was leaving this year? I have to doubt it. It also seems to indicate that Stewart only make the decision recently).

Regular readers of this blog know that I was at the Daily Show with John Cleese in November, and based on the very little I could see, everything looked happy and orderly, and it all seemed to run like a well-oiled machine. Perhaps that gives us hope that whoever steps into those massive shoes just may be able to carry it forward even a fraction as well as Jon Stewart has done.

…for today only, my Python Process class at the iO Chicago is cancelled. I thought about posting a picture of the house and the roads buried in snow, but anyone who lives around here only has to look out the window, and anyone living in a place that isn’t being buried doesn’t want to think about it. Continued next week…