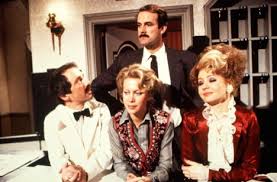 John Cleese is looking to have a very busy 2016. In addition to everything else on his schedule, including an Australian tour with Eric Idle (which I wrote about here), filming a movie, scripting a Feydeau farce for a possible West End production, and lots of writing, The Daily Telegraph is now reporting that a stage production of Fawlty Towers will be opening in Australia in August.

I haven’t had a chance to confirm this yet with @johncleese, but this would undoubtedly be similar to a very successful Scandinavian production that was presented recently. John has found a way to stitch together three episodes of @fawltytowers into a full-length play, and will doubtless be down under overseeing the production this summer. No, John and the rest of the cast of the original TV series won’t be on stage, but if John is involved, this will be good.