Monty Python’s Life of Brian opened in New York the year after shooting wrapped in Tunisia. It was a soft opening at first–it was slipped into one theatre and ran largely without controversy for several weeks. Then in September, the Pythons themselves all flew into town (and so, naturally, did I). They kept to a rather busy schedule, doing lots of TV, radio, and press interviews to promote the film, which was getting great reviews but also upsetting a few folks (Graham Chapman told me “There are some people whom one would wish to offend”). While I was walking to their Central Park South hotel, I saw a full-page tabloid headline from one of the smaller newspapers–I can’t recall precisely what it said, but it seemed a little jarring to see a full-page headline devoted to the film. When I got back to their hotel, I ran into one of the people with Handmade Films. When I told her about it, she was quite interested, so I promised to get her a copy if I could find one.

Not long afterward, I found and bought the last remaining copy I could find of the tabloid, and dutifully headed back to the hotel. For some reason, there were dozens of people gathered in front, but I brushed past them and made my way to the elevator. I rode up to the suite that was serving as base camp for Handmade and knocked on the door. A smiling John Goldstone, the film’s producer, opened it and said hello. “Hi, John,” I smiled, and brushed past him, heading toward the adjoining room. I had planned to drop off the newspaper and leave. John appeared a little uneasy, but I was moving too quickly for him to stop me.

Then, from the far corner of the room, I heard someone call “Howard? Howard Johnson?” I turned to see George Harrison grinning back at me. 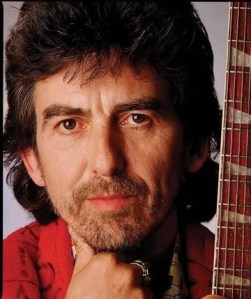 I was a little stunned. The one and only time I had met George was nearly a year ago, in Tunisia, during the slightly chaotic evening that I wrote about last week. I hadn’t noticed him, but he recognized me! I later realized that in addition to our conversation, he probably recalled me from the Python fanzine that I had given him a year ago. If he could remember that, he was a serious Python fan.

We chatted for a few minutes, then John Goldstone politely interrupted George and reminded him that they had an appointment for lunch. I rode down the elevator with them, with George chatting away. I asked him about the rather large crowd in front of the hotel, whether it was for him, but he shook his head “no” and speculated that it was for The Who, who were playing their first concerts since Keith Moon’s passing. When we got to the first floor, he didn’t seem to want to leave. But business called, and they slipped through the lobby to the adjacent Stork Room, avoiding the crowd outside.

Later that day, I came down the elevator with another guy who looked vaguely familiar. We got off and he walked outside, into the crowd, which swarmed around him for autographs. I thought it might be Kenny Jones, who was filling in as drummer for The Who at the time. So I asked an enthusiastic member of the crowd, who gasped breathlessly “That’s Bruce Springsteen!” He was playing that weekend for the No Nukes concert. A lot happens in New York…

I was a little surprised I hadn’t recognized him, but not particularly bothered. Riding in an elevator with Bruce Springsteen was anti-climactic after visiting with my pal George.