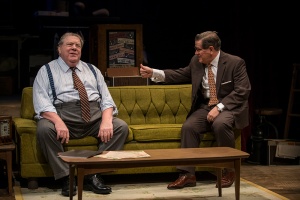 I had the pleasure of seeing a wonderful new play at the Northlight Theatre in Skokie this weekend, and if you’re anywhere in the vicinity–or even if you’re not–I strongly urge you to go way out of your way to see this world premiere that is running for two more weeks. Full disclosure: Funnyman stars two friends of mine, George Wendt and Tim Kazurinsky, but I’d be strongly recommending it even if I’d never heard of either one of them.

Folks who know George only from Cheers may be in for a surprise. This is a very emotional role that runs the gamut from laughs to heavy drama. And Tim is wonderful as his agent/friend–they first worked together at Second City back in the 1970s, and they bring the feeling of their real-life friendship to these roles. George and Tim have both been tearing up the Broadway stage recently, so we are lucky to have them back here. And when you add in Amanda Drinkall as the daughter, along with the other supporting cast, well, I haven’t seen a better show all year.

Funnyman is based on the story of Bert Lahr, who, late in his life, was offered the chance to star in the world premiere of Waiting for Godot, with elements of Buster Keaton’s childhood mixed in as well. It’s well written and well directed, and–well, just go see it. You’re welcome.