This is a nice piece on the Monty Python reunion in the new Time Out. My pal Mark Evanier noted here that although he is, like so many of us, a huge Python fan, he was bothered about a couple of things. I thought I’d take it upon myself to address them and possibly un-bother him, or at least bother him a little less.

Firstly, this is, almost certainly, the final Python show. I say “almost” because anything can happen, of course. But the most recent word that I have from reliable sources–VERY reliable sources–is that despite some talk about a U.S. tour, etc., none of that is happening, not is it likely to happen. Without giving away confidences, the simple fact is that the five surviving Pythons are all extremely busy men (Graham, of course, has nothing but time on his hands), and it’s very difficult for them to carve out the same chunk of time to so much as have lunch together. The fact that they’re doing ten reunion shows in July is almost miraculous. The fact is, one of the Pythons is committed up through next year (when a U.S. Tour had been discussed), and when that commitment ends, others will be equally busy. And so on.
Of course, after the end of the shows on July 20th, the guys could all sit down and decide that they had so much fun that they want to do it again. But the busyness of their schedules (and, as they constantly remind me, the advancing of their ages) make this extremely unlikely. As one of them told me, “By the time we’re all available again, I’ll be too old to be climbing up on the stage.”
Secondly, Mark seems a bit bothered by the way the Pythons seem to tease, insult, and basically poke fun at each other. I’ve long since gotten used to this, but it’s true, they do this on occasion, and there have even been times over the past several decades when someone has taken something the wrong way. But it’s something they’ve always done. And, particularly when they’re doing interviews, it’s not terribly entertaining, interesting, or funny for them to say “The other Pythons are warm, wonderful human being.” Of course, they sometimes do say this, or words to that effect, but if they say it 99 times for every one time they insult one of the others, guess which is going to turn up in print?
The Time Out piece is actually rather perceptive in this regard, and the writer refers to them as like family. I’ve always told the various Pythons, particularly when there may have been a (temporary) falling out, that they are more like brothers than friends. When friends argue and fight, they often go their separate ways for good. But the Pythons are like brothers, who can bicker and argue, but share a common bond that will always bring them together eventually.

Before I get too philosophical about all of this, I’ll just leave you with this takeaway: if you’ve ever wanted to see Monty Python Live, this is almost certainly your only chance. But you’ll have to come to them, as they won’t be coming to you. Trust me.

My pal Mark Evanier and I have been trading comments about the Python reunion on our respective blogs. Here’s his latest.

The Python reunion will inevitably be less of a performance and more of a rock concert, with people showing up to see the legends performing their legendary sketches. John Cleese always talks about how he was unnerved when they first performed the Dead Parrot Sketch live at the City Center in New York, because the audience was so quiet. He thought it has bombed, until he saw the audience members all mouthing the words.

On another occasion, performing the same sketch, Michael Palin had broken his concentration so badly that John had completely forgotten the words. He leaned over into the audience and said “What’s the next line?” And about a dozen people shouted it at him. He began conducting the audience, who knew all the lines as well as he did, for the rest of the sketch. Those are the kinds of moments that will be special for the audiences who see them live.

The guys are trying to satisfy both segments of the audience–those who want a “Greatest Hits” performance, and those who want to see something–well, something completely different. Which may be impossible. But it’s safe to say that there will be new spins on some of the old favorites, as well as some bits that have never been performed live, and several surprises.

A live show had been under serious discussion in 1999, to be held in Las Vegas. The opening number would have featured an over-the-top Vegas-style musical production, with showgirls pushing around Graham Chapman’s coffin. I doubt they’ll be taking the Vegas approach this time, but that gives you an idea of the sort of thinking they’re doing.

One thing is certain: whether audiences are going for the entertainment or the history, they’ll be getting both.

I’ll be posting ticket information here soon, along with some Python book information.

My old pal Mark Evanier writes one of the best blogs ever (here), and is one of the reasons why I started blogging. He’s always interesting, and I agree with him about 99-percent of the time. He’s also a huge Python fan, and recently wrote about the upcoming Monty Python reunion here.  I think I should probably point out a couple of things to balance his thoughts.

It’s true–Graham Chapman will not be up there on the stage with them physically. My dear pal Graham made an ill-advised career move back in 1989. He has stubbornly insisted on remaining dead, so I suspect the other Pythons finally got fed up and decided to reunite without him. Yes, it will be sad to not have Graham there in person, but he will certainly be there in spirit and in video clips. Frankly, I’ve gone back and forth on this over the years, but have come to the conclusion that it’s good audiences will have a chance to see 5/6ths of the Pythons performing live, particularly when the other option is 0/6ths of the Pythons. 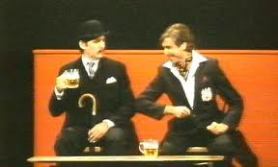 Several people have also asked me about the Pythons getting up there “at their age” and doing their old sketches. My feeling is that is if a championship pole vaulter decided to make a comeback at age 70, he may be missing a step or two. But with comedy, particularly the Python style of comedy, they can perform as well as ever. I saw John Cleese perform a couple of months ago, and believe me, he hasn’t lost his sense of timing, and the others are every bit as sharp. This is going to be fun.