The older I get, the less late night TV I watch. Sad, but true. Although I don’t watch him regularly nowadays, I’m still not ready for David Letterman to retire. He was always the man back in the old days, and whenever I’ve tuned him in over the past few months, I usually have a good time. I’ve got friends and acquaintances who work for a few of the various shows, and just about all of them are big Dave fans. So, it’s going to be sad to see him leave.
The next year will be interesting to see the parade of guest stars coming by to say one last farewell. You can bet, however, that the final guest of the always loyal Dave will be the always loyal Bill Murray. The two of them have a great chemistry, and Bill is always an audience-pleaser. Bill was his first guest on his first late night show in 1982, and this clip shows why he comes back regularly. Legend has it that Bill came into the writers room that afternoon with a bottle of vodka and forced the writers to imbibe, and that is the explanation for the final segment here. Enjoy.

It was 80 years ago, March 9, 1934, that Del Close was born in Manhattan, Kansas. During the nearly 65 years he was with us, he taught us, directed us, appalled and entertained us, amazed and enraged us, enlightened us, and, most of all, made the world a better place for his having been here.

Del could be a walking contradiction, capable of surprising even those closest to him. He was a contrarian, a philosophy that informed much of his work and his life. He was also one of the few true geniuses I’ve ever known, with the ability to process information and observations and present them in new ways.

His life story has taken on legendary proportions, in part because Del believed that legends were often more truthful than facts. He was traveled the country with Dr. Dracula’s Den of Living Nightmares, knew L. Ron Hubbard before Scientology, appeared in The Blob remake, cavorted with the Merry Pranksters, used aversion therapy to recover from alcoholism, kicked a cocaine habit with the help of a coven of witches, became a very talented stage and film actor, helped to develop and became the greatest champion of long form improvisation, and bequeathed his skull to the Goodman Theatre for their productions of Hamlet.

Del directed John Belushi, Bill Murray, Harold Ramis, John Candy, Chris Farley, Tina Fey, Mike Myers, Amy Poehler, Stephen Colbert, and many others. He was co-creator of the Harold, director for Second City, San Francisco’s The Committee, and the ImprovOlympic (now iO), and “house metaphysician” for Saturday Night Live. His students went on to found the Groundlings in Los Angeles, the Upright Citizens Brigade in both New York and Los Angeles, and the Annoyance Theatre in Chicago.

I researched all the claims and rumors about his life while I was writing his biography The Funniest One in the Room. And although I discovered were some exaggerations and fictions, I learned that the most unbelievable stories were the true ones.

His ashes, along with a few photos and other memorabilia, are on display at the iO Chicago, and I’m sure he’ll be making the move when the iO moves to a new building later this year. Stop by and say hello. Del would like that.

and the best moment of the 2014 Oscars. Thanks Bill. We’ll miss you, Harold.

A few years ago, one of the classic Second City casts was going to reunite for a one-night-only performance. I asked a few of them about doing an article about the reunion, but a couple of them were reluctant. Harold Ramis was not one of them. I asked whether he thought there was a fear of failure after being off-stage for so long, but he assured me that wasn’t the case, at least with him. “I’ve failed way too many times,” he told me with a laugh. “I’m failed on a national level. I’ve failed on a worldwide level!”

We both laughed that day. I thought about reassuring him of his many successes, but I knew it wasn’t necessary. He already knew about them, and besides, the failures were funnier.

The list of Harold Ramis’s professional successes is long and well-known. It’s worth noting, however, what an all-around great guy he was personally; if he could do anything for you, he would.

I certainly did not know him well, although our paths crossed a few times. I interviewed him for STARLOG magazine (when he directed Multiplicity–one of his lesser efforts). He helped me when I was writing The Funniest One in the Room (my Del Close biography).

He was in the midst of his publicity tour, promoting Analyze This!, when he got word that his director and friend Del Close was dying. He immediately flew back to Chicago and attended the now-famous “living wake” for Del the night before Del passed away. A very classy guy. 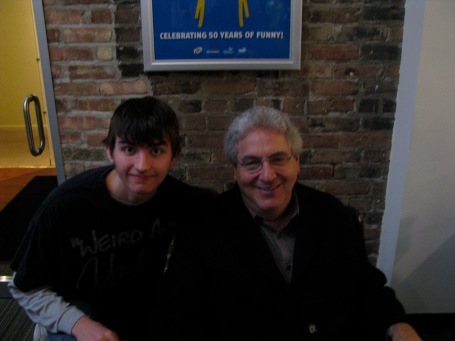 And at the Second City 50th Anniversary in 2009, he gladly posed for a photo with my Ghostbusters-loving son.

I didn’t know he was ill, but I was very happy to hear that Bill Murray had been by to visit. The two of them had been estranged for many years, but it’s nice to know that they managed to put it aside when it counted the most.

And it should also be noted that Harold was a Chicago guy (admittedly, by way of the North Shore). But when he became successful, he didn’t pack up and move to L.A. Instead, he kept an office and a home in Chicago.

This is a huge loss to comedy, to Chicago, and to everyone that was ever lucky enough to know him. Rest in peace, Harold.