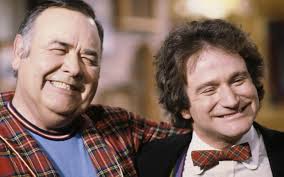 It was, of course, a way to help process what seems to be so difficult for many of us to process: why someone as successful and famous and wealthy as Robin Williams couldn’t bear to go on living. I’ve always said that suicide is a permanent solution to a temporary problem. And I think that’s true in most cases, but to someone suffering from major clinical depression–well, I’m not so sure they can see it as a temporary problem.
The question seems to be how we each process it all. I can’t help thinking of Jonathan Winters, whom I’ve written about in the past, and who was idolized by Robin Williams. I can’t imagine how Mr. Winters was able to make it through life without performing–whether it was on national television, or for someone who approached him on the street. (And I’ve seen both, and I’m not so sure he wasn’t at his funniest when he was talking to a waiter or a group of tourists.) Because when he wasn’t performing, he got into a dark place very quickly, and it was very difficult to get him out of it. He always blamed his father and his upbringing, but there was little doubt, to me, that the demons seemed to come from the same place as those that plagued Robin Williams.
Both men seemed to try to exorcise their demons through comedy, and both seemed to be successful for a while. But Mr. Winters was able to stave them off, Robin wasn’t. Why, we’ll never know. All we can do now is hope we can find a way to help the next generation of Robin Williamses from succumbing to the darkness.