The boys are off and running (or silly walking, as the case may be), so I thought I’d share a few thoughts.

First of all, the running order of the show seems to be about what I expected: just about everything a Python fan would expect to see is there, including a few favorites (such as Spanish Inquisition) that have never been performed live. There are a requisite number of video clips and musical production numbers which fill the gaps during the time needed for them to change and get ready for the next sketch. I’m not going to list the running order here–it’s easily available in the internet for anyone who wants to see it–but it’s a very good mix.

The critics seem to love it, except, of course, for those that don’t care to see a bunch of 70-year-old Pythons doing 45-year-old sketches. Sorry, but that’s the best you’re going to get. And it’s plenty good enough, according to the fans who were there the first night. A few critics don’t seem to get it at all (and why they would be tapped to review a Python reunion show, I’ll never know), and have continued to get facts wrong, and haven’t cared enough to look up the readily-available names of some of these 45-year-old sketches. No matter–nothing they write is going to prevent a single fan from buying tickets and turning up. There are some pretty good, perceptive critics with some good reviews, including this one and this one.

Eric deserved HUGE credit for putting the script together and directing this massive enterprise. How massive, I’ll know for sure after I’ve seen it, but I have a feeling it’s pretty massive.

And I’m so glad to see that Graham starts and ends the show. I’m sure that he would be bemused by the whole idea of the reunion, but as eager as anyone to participate. The others did him right.

The boys are doing shows five days in a row this week. That would be a lot of men half their age. I think they’re going to need every day off to rest up for the second and final week. Fortunately, they’ll be doing two shows, with a day off before the final three shows. And I think some of them may be regretting that they agreed to meet and greets every night after the shows…

I’m planning to be there for the final three shows. Having seen them at the City Center in NYC in 1976, as well as the Hollywood Bowl in 1980, this has a momentous feel to it (probably because, in the world of modern comedy, it IS pretty momentous). 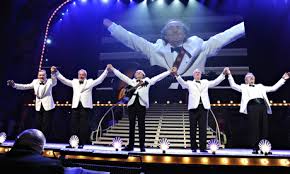