There’s not much I can add to what so many others have written about the death of Sid Caesar since his death was announced. A genius? Yes. Brilliant? Of course. 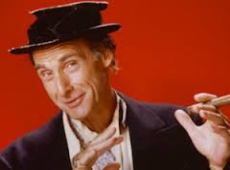 I only met him one time, briefly, and of course it involved Monty Python. In 1994, I was attending a party celebrating the 25th Anniversary of Monty Python at the British Consulate in L.A. It was an outdoor affair, a garden party, and as is usual for these sort of things, there were a number of celebrities, some undoubtedly Python Fans, and others having very interest in Python. Eric Idle, Terry Gilliam, Terry Jones, Carol Cleveland, and Neil Innes were there representing Python. The press had turned out, and set up interviewing areas. A number of them were swarming around Richard Pryor, who was holding court in his wheelchair on a small makeshift stage. The Pythons themselves were more low-key, usually speaking to reporters one-on-one.

I ran into Andy Dick, who was a friend from Chicago, and we were catching up and name-checking some of our other mutual friends. Suddenly, in the middle of a story, Andy stopped and gasped “Oh my God, there’s Sid Caesar!” I turned and saw a tall, elderly man apparently wandering by himself. Andy and I scurried over to him and gushed a bit, expressing our admiration for the man and his work. Caesar looked a bit tired but grateful and thanked us. I was called away, but Andy remained, singing his praises to the legend himself. At that time, I think Andy had done NewsRadio, but it was before he had gone through his now well-known rough patch with drugs and alcohol, so he was a respected TV comedy figure. Whether Caesar even had a clue as to who Andy was, I don’t know. But I had the feeling that Caesar heard this a lot, and while he appreciated it no matter who it came from, he was also a little bored and frustrated because he was working very little. He looked old and tired, but managed to live another twenty years clean and sober, which for him, probably meant a lot.

A few minutes later, Andy ran over to me excitedly. “That was Sid Caesar! We just talked to Sid Caesar!” he gushed. While Caesar had probably forgotten both of us by that time, I think it’s something that both Andy and I will remember.