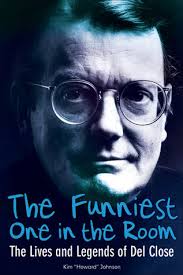 The Funniest One in the Room: The Lives and Legends of Del Close

Nichols and May. John Belushi. Bill Murray. Chris Farley. Tina Fey. Mike Myers. Stephen Colbert. For nearly a half century, Del Close—cocreator of the Harold, director for the Second City, San Francisco’s the Committee, and the ImprovOlympic, and “house metaphysician” for Saturday Night Live—influenced improvisational theater’s greatest comedic talents. His students went on to found the Groundlings in Los Angeles, the Upright Citizens Brigade in both New York and Los Angeles, and the Annoyance Theatre in Chicago. But this Pied Piper of improv has gone largely unrecognized outside the close-knit comedy community.

Del was never one to let the truth of his life stand in the way of a good story—and yet the truth is even more fascinating than the fiction. In his early years, he traveled the country with Dr. Dracula’s Den of Living Nightmares, knew L. Ron Hubbard before Scientology, and appeared in The Blob. Del cavorted with the Merry Pranksters, used aversion therapy to recover from alcoholism, and kicked a cocaine habit with the help of a coven of witches. And when he was dying, Del bequeathed his postmortem skull to the Goodman Theatre for use in its productions of Hamlet—a final legend that lives on, long beyond the death of the father of long-form improvisation.

In his account of the life of conceptual humorist, teacher, actor and improvisational comedy maestro Del Close, Johnson (Close’s long time friend and a co-author, with him, of Truth in Comedy) affectionately recounts the successes and demons of a man largely unknown outside of comedy circles. As a teen, Close left his Kansas hometown for a traveling carnival, a formative performing experience, and eventually, he joined a small comedy troupe which lead to stand-up in New York, an appearance on Broadway, comedy recordings and “prodigious drug use.” In 1967, Close helped create a long-form of comedy improv called the Harold, a significant performing breakthrough. During a ten-year stint providing directorial guidance to the famous Second City comedy theater in Chicago his reputation grew and he saw more than a few of his students join the cast of Saturday Night Live. When he died in 1999, his will made news: “I give my skull to the Goodman Theatre for a production of Hamlet.” Johnson interviewed more than 80 friends and associates for this book, and his apotheosis of Close as the funny fireball and grand guru of American improvisational comedy is a delight to read. 50 b/w photos.
Copyright © Reed Business Information, a division of Reed Elsevier Inc. All rights reserved.

“Johnson’s book should be read by anyone who has an interest in comedy and show business. This is the real thing.”  —Library Journal
“Johnson’s apotheosis of Close as the funny fireball and grand guru of American improvisational comedy is a delight to read.”  —Publishers Weekly

“The definitive biography of an improvisational comedy guru . . . this loving, honest portrait will help the rest of the world get hip to the guy who made comedy hip.”  —Kirkus Reviews

“Without Del Close I wouldn’t be half the improviser, actor, comedian, or writer that I am. . . . Johnson’s book is a gem!”  —Jeff Garlin, executive producer and costar, Curb Your Enthusiasm

“Johnson’s book proves that Del Close is the most unrecognized and yet most influential comedians in the last fifty years.”  —Matt Besser, founding member, Upright Citizens Brigade

1 thought on “The Funniest One in the Room: The Lives and Legends of Del Close”